There was a discussion on Lifehacker about the end of life for XBMC on Xbox support this past friday, and a discussion was raised about HD on your XBMC enabled Xbox.

I for one want to make the most use out of my HDTV without having to spend a lot on a PC that just does media playing. There’s cheaper ways, and having a softmodded Xbox also provides disk-less gaming, whether it’s actual Xbox games, or emulators from past consoles. Last summer, I was poking around eBay and saw auctions for component cables for the original Xbox. I knew nothing about the capabilities of the Xbox, as I had a generation gap from the Dreamcast until I played a PS3.. Been out of the loop! I saw that some games were HD capable.
How this relates to XBMC: I started seeing things about how Xbox can’t handle HD movies, and I know in it’s raw form it cannot. Hell, you need a semi-decent machine (plus VLC) to handle a raw MKV Blu-Ray rip. So my first thought was, how then do I convert my *obtained* rips to a format that will work good on the Xbox? I found out about Handbrake, and continued to Google along trying to find the best settings. Here’s my older blog post relating to this. In short, you crop off the 1280 width to 960, while keeping the height the same. You also knock the target file size to 3/4 of the original. Less data to send, but the video quality stays virtually untouched. Be sure 2-Pass encoding is also selected! Obviously I had no clue at first, and now it’s still a little trial and error, but it’s generally relating to the audio stream and passing it through to the receiver.
The cables on board: 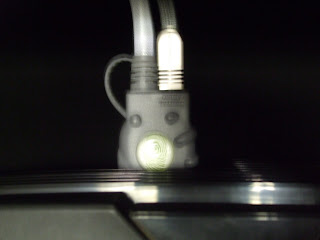 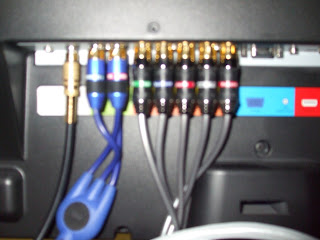 I purchased Psyclone’s Component cables for the Xbox, which also features a Optical out. This runs directly to my 5.1 capable stereo receiver. I also kept the Audio RCAs plugged into the TV so that I could still have audio if the Toslink was being used by the HD cable box (only one optical input)
Picture settings: 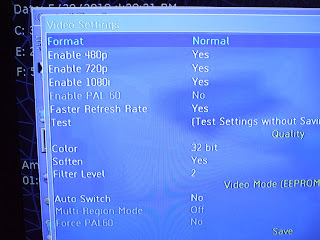 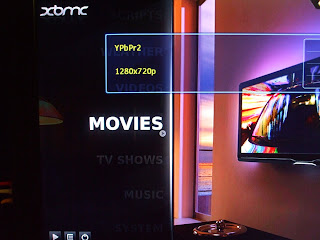 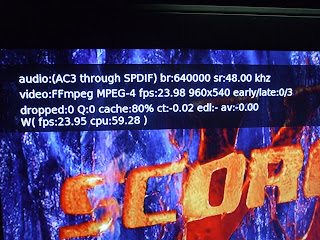 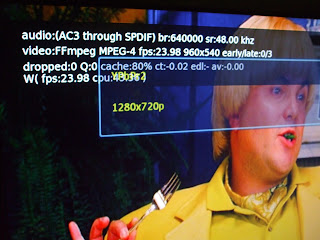 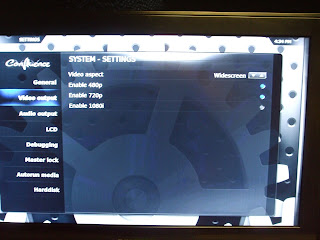 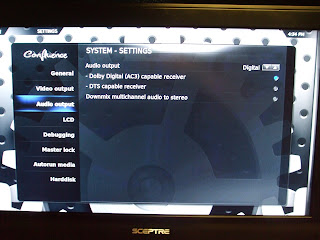 I kept the TV in frame for a few pictures to prove the concept here. I’m also running an Xbox-Optimized Confluence theme which was missing from the Xbox ports. That and other Xbox friendly HD-ish themes can be found here. As you can see, once the cables are plugged in, you should be able to go into the Unleash X dash and change your resolution, as well as in XBMC. 1080i is NOT recommended, as it does not seem to play nice with the RAM. Notice my TV says the output is 720p. 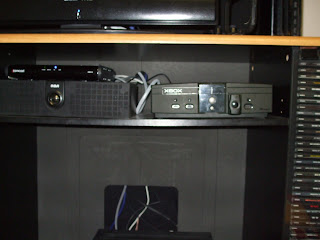 What are your thoughts? Yes, it’s not TRUE HD. As in, not what a Blu-Ray can do. But this is darned near close to it. Think of it as the Xbox friendly skins are, but for your video files. Everything still outputs at 720p, plus I get 5.1 surround! These video files have been tested on both a wired connection and wirelessly via an Airport Express. It can be done via wireless just fine, but I always recommend a wired connection.

Jon is a recreational runner of many, many distances, a music lover at heart, seasoned veteran of combat robot fighting, and a frugal (stingy) shopper of everything. He's a proud husband, and clean and sober since 2012.

This site is a collection of all of my work and exploration. Use the menus above to view the different areas in which I've specialized in.

If you're looking to book me as a DJ/MC for your event, click the DJ menu.

Get in touch here