So after the battery was installed properly, next thoughts were: “How am I charging this?”. Generally I’d have leads to plug into.. But since this setup uses banana plugs, alternate ideas were needed. The solution was to make a set of leads that plugged in via banana but also have taps to balance the pack. 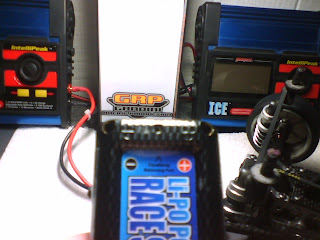 If you notice, the center port on the pack acts as the tap. From + to the tap, it’s the first cell’s voltage, and from the tap to the – lead, it’s the other cell’s voltage (as confirmed by my voltmeter). This is how all lipo balance taps work. It’s just giving you each cell’s leads for the balancer to discharge each cell individually. 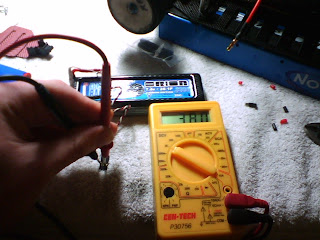 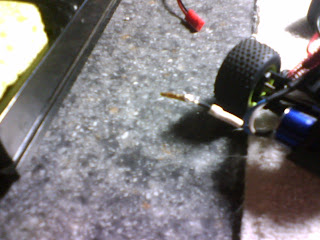 The tap takes a 2mm banana plug. I knew none of the local Hobby shops and electronics stores would carry them. I realized my Micro-T’s brushless motor uses those size plugs to plug into the esc. Since the vehicle needs an overhaul, I decided to swipe a plug and wire it for the LiPo balancer. Now, how to plug it to my Blinky? Easy.. Futaba plugs happen to be the right spacing for the Blinky’s pins. I only need 3 leads for the pack, so it’s a perfect (and cheap) fix. All that’s left is some soldering, annnnd…. 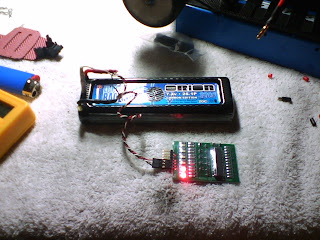 BTW, if you’re in a pinch, a tamiya male plug lead will fit in the tap port.

Jon is a recreational runner of many, many distances, a music lover at heart, seasoned veteran of combat robot fighting, and a frugal (stingy) shopper of everything. He's a proud husband, and clean and sober since 2012.

This site is a collection of all of my work and exploration. Use the menus above to view the different areas in which I've specialized in.

If you're looking to book me as a DJ/MC for your event, click the DJ menu.

Get in touch here